OHLA awarded its largest contract since 2017 worth €321 million

OHLA Group, via its subsidiary, OHLA USA, Inc., announced that it received a $379 million contract to improve traffic flow and travel reliability along the I-5 North freeway in California. The project’s footprint encompasses a total of 17 miles in the city of Santa Clarita and unincorporated areas of Los Angeles County.

Activities to support the lane widening and the HOV lane implementation comprise reconstruction of bridges, retaining walls, and barrier rails, in addition to electrical work for ITS improvements, such as count stations, closed-circuit television, and ramp metering. OHLA USA forces are also responsible for performing earthwork and foundation construction, concrete and asphalt paving, and installation of drainage and potable water systems. The contract also calls for lane striping, signage, and landscaping.

Active in the California construction market since 2013, OHLA USA has performed several key contracts for Caltrans, LA Metro, Orange County Transportation Authority, Alameda Corridor Transportation Authority, City of Pasadena, and the City of Los Angeles. Some of its most noteworthy projects in California consist of the $1.4 billion I-405 Improvement Project, the $238 million Owens Lake dust mitigation, the $148 million Fairway Drive Grade Separation, and the $36 million Argo Drain Sub-Basin facility.

OHLA USA was recognized as “Contractor of the Year” by the specialized publication Engineering News-Record (ENR) in the California and Northwest region of the country and in New York. 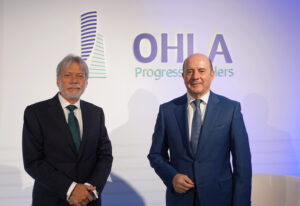