The OHLA USA West Region team, represented by Executive Vice President, Tony Bagheri, was presented with an awards plaque for Regional Contractor of the Year. The company was also recognized for its participation as design-build contractor on the Patsaouras Plaza Busway Station in Los Angeles, which was designated a Regional Best Project Winner in the Transportation category. OHLA USA celebrated this significant achievement with its client, LA Metro.

OHLA USA, Inc. served as design-build contractor for the Patsaouras Busway Plaza Station, which is located just east of the historic Union Train Station in downtown Los Angeles. It provides passengers with a boarding area on the south side of Patsaouras Plaza at the El Monte Busway. The project scope included widening both the north and south sides of the existing El Monte Busway bridge to accommodate the new station platform, construction of an enclosed pedestrian walkway from the platform to a pedestrian overcrossing bridge, and a new pedestrian landing at the existing transit plaza with a new three-stop elevator and stairway. The project improves vertical and horizontal pedestrian circulation, provides a direct connection to Union Station, and widens the existing Caltrans Los Angeles River Busway bridge.​

Operating in the California construction market since 2013, OHLA USA, Inc. has performed several key contracts for LA Metro, Caltrans, Orange County Transportation Authority, Alameda Corridor Transportation Authority, the City of Pasadena, and the City of Los Angeles. Some of its most noteworthy assignments in California include the $1.4 billion I-405 Improvement Project, the $238 million Owens Lake dust mitigation, the $148 million Fairway Drive Grade Separation, and the $36 million Argo Drain Sub-Basin facility. 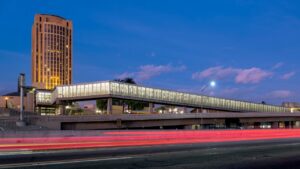