OHLA is awarded a new contract for the expansion of the Stockholm metro, worth more than €86 million

OHLA has increased its presence in the Swedish railway infrastructure sector with the award of a new project -the second so far this year- as part of the extension of the metro network beingdeveloped by the Stockholm Region. The initiative, which amounts to 86 million euros (SEK 885 million), is in addition to another that the company is currently developing and which includes the extension of the Blue Line.

The new project awarded, also within the extension of the Blue Line, includes among its main actions the construction of two line tunnels and a service tunnel with a total length of 3,100 m, as well as a completely new 300 m long subway station at a depth of almost 70 meters below the existing Gullmarsplan transport interchange. The extension works also include the construction of a high-speed elevator shaft connecting the existing transport interchange with the new Blue Line station, ensuring passenger transit between it and the existing metro stops of the Green Line, Tram Line and bus station.

Opened in 1950, and considered Sweden’s third largest station, Gullmarsplan is a major connection point for buses and the metro, connecting the city center and the southern part of Stockholm, with a daily traffic flow of 84,000 people. The project is scheduled for completion in 2025.

Presence in the Swedish market since 2017

OHLA has been awarded its second contract with the Region of Stockholm for the extension of the subway system. The first contract is for the extension of the Blue Line from Kungsträdgården and is valued at 69 million euros. It includes the construction of two single-track tunnels and a service tunnel, as well as cross tunnels, with a total length of approximately 4,500 meters. The uniqueness of the tunnel is that it is located right in the center of the city and crosses under the city’s National Art Museum, the Grand Hotel and the Skeppsholmen islet, where the Museum of Modern Art is located.

OHLA entered the Swedish market in 2017 with the award of the €295 million project to upgrade the existing line between Lund and Arlöv (Malmö) and considered one of the busiest rail routes in the Scandinavian country. This project, which will increase daily traffic by up to 200 trains per day, was awarded in consortium with NCC by Trafikverket (Swedish Transport Administration). The same client awarded this consortium the extension of the railway section between Lund and Flackarp in Skane. 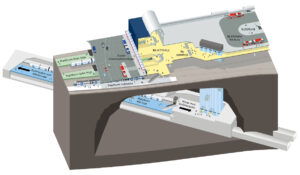