The subway Line 3 extension project, in which OHLA is participating, is part of the expansion plan for the Santiago subway network to improve urban transport in the city. It includes, among other works, the construction of shafts and galleries, tunnels and stations along an extension of more than 700 meters. It should be noted that OHLA has carried out on the same line the construction of civil works in the form of shafts, galleries and tunnels, both in stations and inter-stations, in sections 5 and 6, with a combined length of 7 kilometers –in addition to civil works of shafts and galleries in sections 1 and 2, as well as reinforcement shafts at the Franklin Station, which combines the current Line 2 with Line 6, a technical and constructive challenge as it is the first subway station in Chile that was built under another line in service.

The company has also carried out civil works at Plaza Egaña Station and the interstation tunnels on Line 4; the Gruta de Lourdes, Blanqueado and Lo Prado Stations on Line 5; the workshops and depots on Line 6, as well as the reinforcement shafts at the Franklin Station connecting Lines 2 and 6.

Present in Chile since 1981 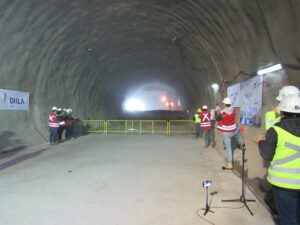