OHL Volunteers will accompany a group of pilgrims made up of young people with different intellectual abilities in the last stages of Camino de Santiago, between 11 and 14 July. The initiative, promoted by Down Madrid in collaboration with the Adecco Foundation to encourage the elimination of stereotypes and social barriers around disability, has been supported by OHL Volunteers since 2010. During this time, more than 180 OHL employees have joined this inclusive initiative, benefiting more than 130 people, and nearly 200 km have been covered.

OHL volunteers will join the group of young people with Down syndrome and other intellectual disabilities to travel the last two stages of Camino de Santiago together: Pedrouzo-Lavacolla and Lavacolla-Santiago de Compostela, until their arrival at the cathedral. Likewise, throughout the event, leisure, sports and cultural activities will be carried out aimed at promoting the skills and abilities of people with intellectual disabilities to improve their ability to relate and their autonomy.

For more than a decade, OHL Volunteers has been promoting solidarity campaigns, corporate volunteer initiatives and other social and environmental activities that have benefited more than 20,000 people in Spain, Mexico, the USA, Canada, Chile, Peru and Colombia, among other countries, thanks to the participation of close to 6,500 employees and in collaboration with around 150 agencies. 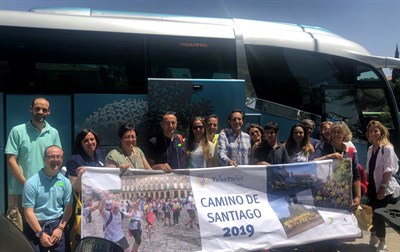 Group of volunteers will meet the rest of the group in Pedrouzo.