The company boosts its concessions portfolio

OHLA has been awarded a new contract in Chile for the construction and maintenance of four hospitals in the Biobío region. This way, the company reactivates its concession portfolio following the contract awarded by the Chilean Ministry of Public Works, which contemplates investments of close to 290 million euros over the next 15 years. Together, the four hospitals will contribute 569 beds to the health system and will benefit a population of more than 400,000 people.

The Santa Bárbara Hospital will be a 12,000 m2 facility that will serve nearly 22,000 inhabitants of the municipalities of Santa Bárbara, Quilaco and Alto Biobío. It will have 37 beds, 21 medical, dental and non-medical consultation rooms, an emergency service, a minor surgery ward, an imminent delivery room, a hemodialysis unit, a community mental health center and a Pewenche Mother’s Home.

The Nacimiento Hospital will have a surface area of 13,000 m2 and will serve 36,000 inhabitants of the municipalities of Nacimiento and Negrete. The facility will have 47 beds, inpatient services, outpatient care, 29 medical, dental and non-medical consultation rooms, an endoscopy unit, diagnostic and therapeutic support units, an imminent delivery room, an emergency service, a psychiatric day hospital, and administrative and logistical support areas.

The Coronel Hospital will have a surface area of 79,000 m2 and will serve a population of approximately 308,000 people from the municipalities of Coronel, San Pedro de la Paz and Santa Juana and nearby towns. The facility will have 353 beds, 53 medical, dental and non-medical consultation rooms, 21 procedure rooms, 9 operating rooms, 3 labor and delivery rooms, a psychiatric day hospital, a community mental health center, a hemodialysis unit and an emergency service.

Lastly, the Lota Hospital will have 40,000 m2 of surface area, which will mainly serve 48,000 people belonging to that commune. The facility will have 132 beds, 19 medical, dental and non-medical consultation rooms, 20 procedure rooms, 5 operating rooms, 2 labor and delivery rooms, a Psychiatric Day Hospital, a Community Mental Health Center, a Hemodialysis Unit and an emergency service.

More than 40 years in Chile

OHLA has continuously developed infrastructures in Chile for more than 40 years, where it has developed outstanding construction projects and concessions, to which are added its actions in the Industrial and Services field.

In recent years it has been a major player in the development of concessions in the country, winning more than 2,500 million euros in unique building projects such as the Santiago Justice Center and various infrastructure projects.

In terms of hospital infrastructure, it has built eight hospitals, totaling more than 2,865 beds and more than 418,000 m2, including the Military Hospital of La Reina, the Gustavo Fricke in Viña del Mar and the new hospital in Curicó.

At a global level, OHLA’s hospital construction activity began in the 1930s, and since then it has built more than 150 new hospitals with a total built surface area of more than six million square meters and more than 60,000 beds. In addition, OHLA has executed 200 renovation and expansion projects and nearly 100 health centers. 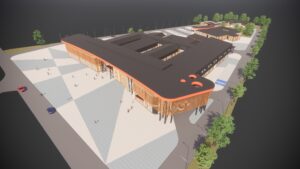