OHLA, a renovated company. The company has launched its new corporate image as a global group providing sustainable and avant-garde infrastructures.

Reinforced balance sheet structure. The company has ended its restructuring and capitalization process by boosting its own funds with 205.1 million euros, reducing its debt by more than 105 million and extending its bond maturities for three more years until 2025 and 2026.

Boosted EBITDA. Gross operating results have moved forward in 1H at a 51% rate, until reaching more than 30 million euros.

OHLA has registered net attributable results of 75.4 million euros in 1H2021. This evidences that the company is again generating a profit.

Of interest is procurement in Construction during the first six months, registering an 80% increase over the same period last year, until reaching 1,550.6 million euros. The new awards obtained during this period include over 370 million in Peru and almost 370 million in the US. In turn, Europe almost totals 250 million, with works contracted in Sweden and the United Kingdom. Thanks to these new contracts, the Construction portfolio has grown by 12.1.%, until June 2021, and has registered 4,468.6 million euros, providing coverage for 23.5 months of sales.

With respect to other economic parameters, of interest are 1,312.3 million euros in Sales, a similar figure to the same period in 2020, taking into account the extraordinary circumstances of last year. A total of 70% of the turnover figure has been generated abroad. In turn, EBITDA has increased up to 30.4 million euros, 51.2% more than the 20.1 million registered in 1H12020. The EBITDA margin in Construction activity is 3.5%.

In the divestments chapter, reference should be made to the sale of participations in Nuevo Hospital de Toledo for 74.6 million, generating capital gains of nearly 46 million, and the 49% stake held in the Old War Office project, for a price close to its book value. Furthermore, an agreement has been reached to sell the stake held in Sociedad Concesionaria Aguas de Navarra, S.A., the closing of which is subject to meeting certain conditions precedent that are standard in this type of transaction.

Last 28 June, OHLA announced to the market that it had successfully concluded the company’s restructuring and capitalization process. This has resulted in the following:

In this stable and financially reinforced scenario, the company is embarking on an exciting stage in its activity where it will undertake its business plan, with the utmost guarantees, firmly seeking to become a solid and profitable company. 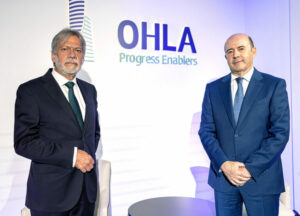