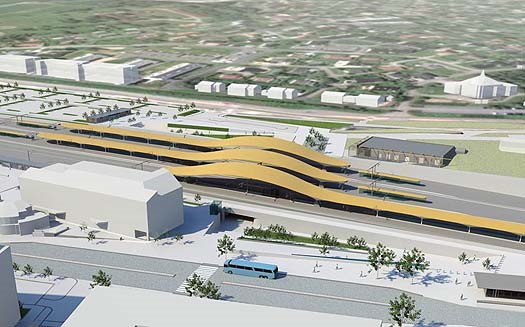 Part of the Follo Line high-speed railway project, linking Oslo to the town of Ski, southeast of the capital. Promoted by the Norwegian Administration for Railway Infrastructures.

The EPC Ski Contract involves reconstruction of the Ski railway station, redevelopment of the station’s surroundings and all railway facilities related to reconstruction of the existing line and the new line. It covers a total section of 3.5 km and the worksite starts at the south end of the Follo Line tunnels and ends south of the town of Ski.

It will include a six-rail section between Langhus and Ski, involving a rearrangement of the two existing rails of the Osfold Line, the execution of two new high-speed rails in the Follo Line and another two that will interlink both. The project involves the construction of access roads, emergency exits, sound barriers and tunnel portals, amongst other components.

Works in the Ski station area will entirely reconstruct the existing station. The new one will include six rails, three central roofed platforms and an underpass. A road bridge will be built over the new rails, plus a new bus terminal, bicycle parking facilities, an extension of the existing car park, roads with sidewalks and technical buildings.

It will provide the metropolitan area of Oslo with an alternative transportation service, helping reduce traffic and polluting vehicle emissions. It will shorten traveling time between Oslo and Ski to half -from 22 to 11 minutes- and, ultimately, will help modernize Norway’s railway infrastructures.