Rehabilitation of natural spaces degraded by human use 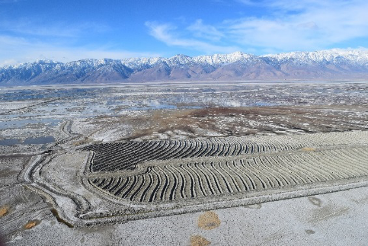 OHL undertook the ECONECT project during 2012-2015 to learn about the behavior of vegetation in relation to large road infrastructures, with the aim of acquiring knowledge that would allow a more efficient ecological restoration, both from an ecological and economic point of view. The results of the project, being of business application, have also been worthy of outstanding scientific interest, given its great research complexity and the rigorous experimental equipment used.

In Lake Owens in California (USA), OHL carried out a project aimed at mitigating the effects generated by the emission of particles from the alkaline salt crust that covers a large part of the lake bed due to the strong wind that characterizes the area. OHL developed several own innovations applied to agricultural machinery to optimize the mitigation actions, without prejudicing the area´s natural environment. It should be noted in this regard that Lake Owens releases up to four million tons of particles per year in the form of dust storms, causing public health problems and a strong environmental impact in the area.